When my husband Elliot and I had our first child, we had no reason to expect her to be anything other than perfect, but she was only a week old when I suspected something was wrong. She didn’t startle to loud sounds, and so I began to test her, banging pots and pans behind her back. Elliot was a surgical resident, and so he pulled out his medical school textbooks and read that newborns don’t react to sound as we do, which gave us hope. At her first visit to the pediatrician when she was three weeks old, I voiced my concerns, and I still remember so clearly his words, I was “an overly anxious new mother who doesn’t understand how newborns react to sound.” At her two-month visit, I again voiced my concerns, and he also noticed that her head control was poor and referred us to a pediatric neurologist, who, in turn, referred her for a hearing test.

On July 15, 1987, one of two dates I would come to remember, the audiologist told us the hearing test would take a half hour. Elliot and I sat in the waiting room for two-and-a-half hours, knowing as more time passed that we were not going to get good news. When the audiologist called us back, she told us that our suspicions were correct, that our daughter had a severe-to-profound hearing loss, words that we didn’t completely understand at the time but soon realized meant that she was almost totally deaf.

In 1991, our second child, a son, was born. He was only five days old when we learned that he had normal hearing. A neurologist had told us our daughter’s deafness was likely due to a virus I’d had when I was pregnant, and we went with that theory. In 1995, though, our third child, another daughter, was born, and she wasn’t even 24 hours old when we learned that she, too, was profoundly deaf.

We opted to have both girls receive cochlear implants and learn to hear and speak, using the most auditory of approaches, the Auditory-Verbal Approach, a decision that would later prove fortuitous. Both girls attended mainstream schools and thrived. In 2006, when our older daughter graduated from high school, there were nine of us in a row, Elliot and me, our other two children, both sets of grandparents, and the girls’ Auditory-Verbal therapist, who, after ten years total of working with both girls, had become an adopted member of our family. We all cheered as our daughter won one of her school’s academic achievement awards, and I remember telling Elliot that we had done it, that we had climbed that hill and could now enjoy the view.

Unfortunately, two months later, that view turned out to be a mountain. During a routine annual eye exam on August 8, 2006, the second date I will always remember, our girls were diagnosed with retinitis pigmentosa (RP). I felt as if I’d been punched in the stomach. I knew about Usher Syndrome. I had always feared it, but it is usually diagnosed by the time a child is ten, and so I thought we had escaped it. Usher Syndrome type 1, the most severe type, includes profound deafness at birth accompanied by vestibular issues, which explained my girls’ poor head control as infants and late gross motor milestones that they both also had. It’s often referred to as a “double whammy,” because, just when the child’s hearing has been addressed, the family is hit with the diagnosis of RP, which meant that our daughters would also lose their vision.

When we received the deafness diagnosis, our girls were oblivious babies, but the Usher diagnosis was different. In particular, our older daughter was 19. She was a gifted artist who was a few weeks from starting art college. She fell to pieces, and watching her was one of the most painful experiences of my life. She spent two days in bed, refusing to get out or eat. Finally, with the help of a friend, she came to the dinner table and, exhibiting what we had come to know as her strengths, persistence and determination, told us that she had never let her disability stop her before and wasn’t going to then.

As we had done with the deafness diagnosis, we cried for 24 hours, but we are the type of people who have to do something. Elliot attended the first ever Usher Syndrome research symposium that fall. It was at that research symposium that he met the retinal specialist who had the girls’ blood samples for genetic testing. Usually, it took a year or more to clear the backlog and get results. However, because he had met Elliot and because he knew we were both Ashkenazi Jews, when we returned to his lab, he pulled our samples and tested them for only one mutation, Usher Syndrome type 1F, which we have come to learn is the leading cause of inherited deaf-blindness among those who are Jewish. Approximately 2% of all Ashkenazi Jews carry the mutation.

I became involved with the Usher Syndrome Coalition, which provides support to those with all variants of this disorder. Through attending conferences, I came to understand that, while there was much research for a cure for the vision loss of other types of Usher Syndrome and even a clinical trial for one, there was nothing for Usher 1F. In 2013, Elliot and I decided that we could not wait for someone else to do something, and so we founded Usher 1F Collaborative, a 501c3 nonprofit foundation to fund research for a cure for the vision loss of Usher 1F. When we began, we knew two other affected families. Fast forward almost five years later, and several other affected families have joined us in our quest for a cure. We have funded over $1.2 million in research and have six research labs working on a cure. Our researchers have developed two animal models and have begun development of gene replacement therapy and also testing of drug therapies.

Our daughters are now adults. After spending two years in the Peace Corps in Africa, our oldest landed her dream job in global health development and will marry the love of her life, a fellow Peace Corps volunteer, next month. They love to travel and see the world. Our younger daughter is in her senior year of college next month as a sociology major. She has become a fervent advocate for Usher Syndrome, working both to increase awareness and to raise funds for a cure.

Both girls are already experiencing the effects of retinitis pigmentosa, poor night vision and loss of peripheral vision. We know we are in a race against time. While we are optimistic that a cure for Usher 1F will happen during their lifetime, we need it before their lives are further impacted. We want a cure while they still have enough vision to halt the progression, which will be easier than restoring vision already lost. We want them to be able to continue to pursue all of their dreams and to lead fully independent lives. Cochlear implants and Auditory-Verbal therapy enabled them to far exceed our expectations for their hearing. If I only knew that they would always see as well as they hear, I would rest more easily at night. Until then, Usher 1F Collaborative has become my full-time job. I will not rest until my girls’ vision is saved. 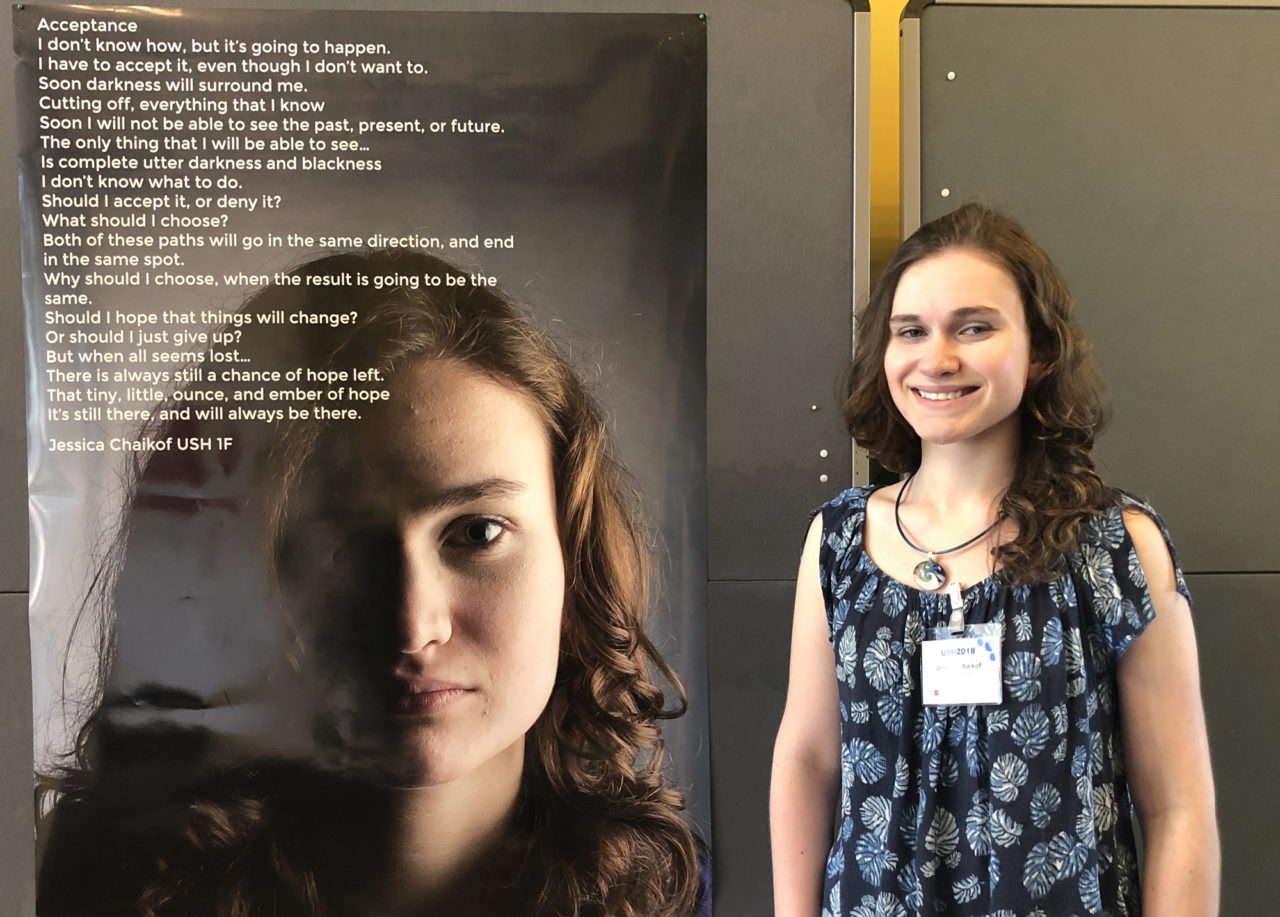